The Masterpiece by Fiona Davis 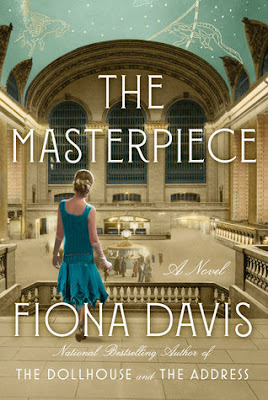 For the nearly nine million people who live in New York City, Grand Central Terminal is a crown jewel, a masterpiece of design. But for Clara Darden and Virginia Clay, it represents something quite different.

For Clara, the terminal is the stepping stone to her future, which she is certain will shine as the brightly as the constellations on the main concourse ceiling. It is 1928, and twenty-five-year-old Clara is teaching at the lauded Grand Central School of Art. A talented illustrator, she has dreams of creating cover art for Vogue, but not even the prestige of the school can override the public's disdain for a "woman artist." Brash, fiery, confident, and single-minded--even while juggling the affections of two men, a wealthy would-be poet and a brilliant experimental painter--Clara is determined to achieve every creative success. But she and her bohemian friends have no idea that they'll soon be blindsided by the looming Great Depression, an insatiable monster with the power to destroy the entire art scene. And even poverty and hunger will do little to prepare Clara for the greater tragedy yet to come.

Nearly fifty years later, in 1974, the terminal has declined almost as sharply as Virginia Clay's life. Full of grime and danger, from the smoke-blackened ceiling to the pickpockets and drug dealers who roam the floor, Grand Central is at the center of a fierce lawsuit: Is the once-grand building a landmark to be preserved, or a cancer to be demolished? For Virginia, it is simply her last resort. Recently divorced, she has just accepted a job in the information booth in order to support herself and her college-age daughter, Ruby. But when Virginia stumbles upon an abandoned art school within the terminal and discovers a striking watercolor hidden under the dust, her eyes are opened to the elegance beneath the decay. She embarks on a quest to find the artist of the unsigned masterpiece--an impassioned chase that draws Virginia not only into the battle to save Grand Central but deep into the mystery of Clara Darden, the famed 1920s illustrator who disappeared from history in 1931.

My Thoughts
My love of historical fiction had begun with Fiona when I first read The Address.  I was mesmerized by her story lines, the depth of her characters and just the way in which her book flowed.
I then moved on to The Dollhouse and I felt the same way.  (How had I not known of her work before?)
Today I am reviewing The Masterpiece and this is by far her best work yet.  Not only was the story line amazing, I loved how the characters weaved in and out of the past and present and the intrigue each chapter created.
Grand Central Station surely is a magical place and the sheer size of the building tells me how many stories, secrets, and lives were changed in those walls.
Clara looks at Grand Central as a stepping stone towards a better life, 50 years later Virginia sees it as her last resort for her life after divorce.  She does her best to see past the grime, crime and the danger of what the terminal has become.
These two woman have a determination, drive and desire to make a life for themselves and the terminal will either make it or break it for them.
You must read the story to understand the twists and turns that Clara and Virginia's stories take and how they intertwine.  Pre-order your copy today.  I can't wait to hear what you think!

Drink Selection
I'm going to pair this selection with a French 75 from the 1920's - sounds delish!

About Fiona
Fiona Davis is the author of THE DOLLHOUSE and THE ADDRESS. She began her career in New York City as an actress, where she worked on Broadway, off-Broadway, and in regional theater. After getting a master's degree at Columbia Journalism School, she fell in love with writing, leapfrogging from editor to freelance journalist before finally settling down as an author of historical fiction. Visit her at www.fionadavis.net, facebook.com/FionaDavisAuthor/ and on Instagram and Twitter @fionajdavis.