Believe Me by JP Delaney 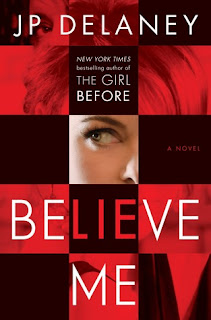 In this twisty psychological thriller from the New York Times bestselling author of The Girl Before, an actress plays both sides of a murder investigation.

One out-of-work British actress pays the rent on her New York City apartment the only way she can: as a decoy for a firm of divorce lawyers, hired to entrap straying husbands. When the cops begin investigating one of her targets for murdering his wife--and potentially others--they ask her to lure the suspect into a confession.

But with the actress pretending to be someone she isn't, differentiating the decoy from the prey becomes impossible--and deadly.

My Thoughts
LOVED this book!  I will admit that some parts of this book were a bit racy for me (if it were a movie I would have to cover my eyes or look away kind of racy) but I loved everything else!  I don't want to give much away in my review because you MUST experience all of the scandal for yourself.
An out of work actress that is trying to stay in this country will do just about anything, and I mean anything, to make rent and keep eating.
At one audition she is asked to be an undercover call girl and trap husbands who are willing to cheat on their wives, and she agrees and dare I say is GREAT at her job.  Then a wife of one of her exploits is found murdered, what in the world?
It gets crazier and crazier up and through the last chapter!  Does this actress survive this craziness or will the crazy world in which she is drawn into be her end?

Drink Selection
I am pairing this book with the perfect cocktail, the black widow!  Totally seems fitting right?

Tony Strong was born in 1962 in Uganda, though his parents came back to the UK when he was six weeks old. He read English at Oxford under the playwright and poet Francis Warner and then went on to work as an advertising copywriter at Ogilvy and Mather, an agency which had already bred writers such as Salman Rushdie and Fay Weldon.

Tony Strong has made more than thirty television commercials, including the celebrated BUPA 'You’re Amazing, We Want You To Stay That Way ' campaign, and the American Express campaign. He has won a BAFTA for a campaign aimed at reducing solvent abuse - one of the very few drug abuse campaigns that have ever been shown to have a measurable effect. Tony Strong was recently poached by Abbot Mead Vickers, whose main account is British Telecom. He has published four novels: THE POISON TREE, THE DEATH PIT, THE DECOY and TELL ME LIES. THE DECOY has been bought for film by Twentieth Century Fox for Arnold Kopelson. TELL ME LIES was recently adapted by Granada Television into a series entitled LIE TO ME.

He has also written under several pseudonyms, including Anthony Capella.