Blog Tour Stop - Just the Two of Us by Michelle Scott 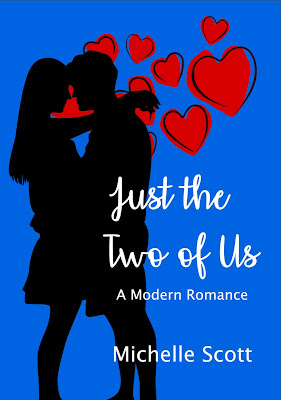 Starla wasn’t trying to steal her older sister’s boyfriend. In fact, she was fighting him off when Janice caught the two of them alone in the dark. Unfortunately, love-struck Janice didn’t see it that way and tried to end her life. Although she didn’t succeed, her suicide attempt left her brain damaged, and it became Starla’s responsibility to care for her. Four years later, the sisters’ peaceful lives are interrupted when Nick, a handsome, young attorney, moves in upstairs. Seeing that Janice is attracted to him, Starla keeps herself out of the picture. After all, she hurt her sister before, and she’s not about to do it again. Yet as much as Starla tries to ignore her feelings for Nick, she can’t bury them entirely. Especially not when he seems to be choosing her over her sister.

This past week, I had two conversations about the same topic: falling in love.

The first conversation was more of an on-line chat with two other writers.  We were talking about a story in which two characters meet for the first time.  The first character, a young woman, had all the earmarks of a successful relationship.  Her fiancée was a decent man who had given her an enormous wedding ring (planets could have orbited around it, said the author.)  However, when she met the young hero of the story (a fairy prince who had been banished to Earth), she realized that she’d never been swept off her feet until that moment.  I’m not sure where the story is going to go after that, but I can’t wait to find out!

The other conversation was with my daughters.  We were talking about chemistry between men and women.  ‘You know,’ my younger daughter said, ‘that moment you realize a guy is hot.’  They both asked me if I’d felt that way about their dad when we first me.  Of course, I said, ‘Definitely!’  However, that was a long time ago.  I still find my husband handsome, but now our love is different.  More mellow, I guess I’d say.  But even though we don’t have that lusty, heart-pounding kind of love, what we have now is much stronger and deeper.  It’s something I’d never change.

In Just the Two of Us, Starla’s first crush was involved someone despicable who used her teenaged infatuation to hurt her.  It’s something that Starla thinks she’ll never get over, so she locks herself away emotionally from men.  That is, until Nick comes along.

Although it isn’t exactly insta-love, there are sparks.  Starla likes the fact that a playful spirit hides underneath Nick’s buttoned-up exterior.  Nick, on the other hand, loves Starla’s whimsical nature.  Sure, they argue about whether or not its proper to have a purple bathtub full of bright-yellow marigolds at the entrance to their businesses, but they come to an agreement.  And as they spend time together, their initial attraction becomes something deeper.  At long last, Starla finds a man whom she can trust.

Whether its chemistry or something slow burning, love is wonderful in all its forms.  Let us all be lucky in that aspect.

About Michelle
Maybe it's because of my Halloween birthday, but I've always been attracted to scary stories. On the other hand, I love romances as well. Once I discovered that these two genres existed side-by-side in urban fantasy novels, I was in heaven! Urban fantasy is like chocolate and peanut butter: a perfect, to-die-for combination that I can never get enough of. I've been writing since childhood, but earned my bachelor's degree in psychology and my master's in English literature. When I'm not writing, I'm a straight-laced English teacher at a two-year college in Detroit. I've been married to Mr. Right for over twenty-five years. I also have three teenaged children: a boy and two girls, all of whom have threatened to never speak to me again if I turn them into characters and put them into my books.
Link to Purchase
Amazon