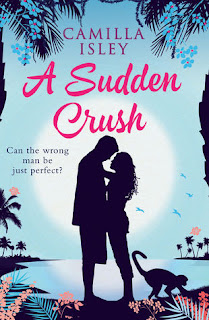 EXCERPT
—♥ CHAPTER FIFTEEN ♥—
Day 47
“Don’t move.”
I suddenly wake up with Connor whispering in my ear, making the hair at the back of my nape stand up. I am lying face down on our cushion mattress, and he has my head pinned to the floor with one of his big hands while the other is caressing the skin on the small of my back.
Wait, what? Is he trying something with me? And why is my body responding to his touch? I stir in protest. He strengthens the grip on my head and back and says, “Anna, trust me. Stay still, do not move a muscle. It will be over in a minute.”
A minute? No wonder his wife left him. I feel him reaching under my shirt and pulling it up, leaving my entire torso exposed.
“It will not hurt, I promise.”
Hurt? Why should it hurt? And what is he planning to do that is going to not hurt?
“You stay still and I will take care of everything,” he breathes down my neck.
Mmm, interesting approach. I don’t necessarily agree, but I can see he might have a point. He slowly lifts his right hand from my head, and I feel his left pressing flat in the small of my back way too close to my derriere. Ok, this is taking it too far. I am about to object again when I see a flash of steel pass before my eyes and I feel a sharp, snappy slap in my back like a whip lash, only not that painful.
I jerk to a sitting position only to find that Connor has nailed something black to the hut’s floor. I lean forward and see that the thing is huge, hairy, and has eight legs.
“Was that monster on me?” I squeal, disgusted.
“Yeah, but it’s fine now, taken care of…”
He doesn’t have the time to finish whatever he was saying, as I’m already running outside. I jump up and down on the beach, swatting various body parts with my hands and arms, and jerking my head convulsively in this and that direction.
“What are you doing?” Connor asks, eyeing me perplexedly.
“I can feel them on me, they’re everywhere,” I scream.
“Who exactly?”
“The spiders. I can feel their hairy legs crawling on me.”
“Listen.” He grabs me by the shoulders with both hands to steady me and stop my convulsions. “You had one spider walking on you—one—and I killed it. So you can stop fussing.”
“You don’t understand…I have a phobia,” I answer, crazed and slightly lurching my head, which has remained the only part of my body free to move.
“You’re ok,” Connor says, encircling my entire body in a strong hug and pressing my head to his chest while caressing my hair in soft, soothing strokes. I’m not sure if it’s a kind gesture or if he’s trying to emulate a straitjacket with his body. But it feels good and comforting, so I’m not complaining.
After five or ten minutes of this treatment, I feel calm enough to let go. He looks at me, tucking a loose lock of hair behind my ear. I feel his mocha-brown eyes burn into mine. His gaze is different; it feels different. I recognize something flashing behind it. Does he like me? That so was an I-like-you stare, or at least an I-want-to-see-you-naked-and-I-don’t-care-about-the-hair-on-your-legs stare.
I blush and pull farther away.
“Um, I feel better now. Thank you,” I blabber awkwardly.
“Anytime,” he says, still looking at me intensely.
“I think I’m going to take a bath, just to calm my nerves and shake the imaginary spiders off. See ya later,” I add even more awkwardly, stumbling clumsily on the sand as I walk away.
I don’t turn around to look at him, not once. But up until I reach the trees I feel his gaze burning between my shoulders. This stranded-on-a-desert-island-with-a-stranger thing is getting to both our heads. And we both need to be reminded that I’m a married woman! For a second there I thought he was going to kiss me. And the scariest part is I wanted him to. I need a cool bath to put everything into perspective. 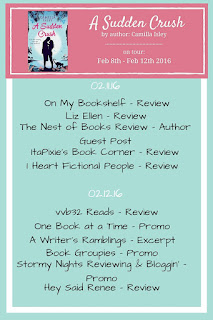 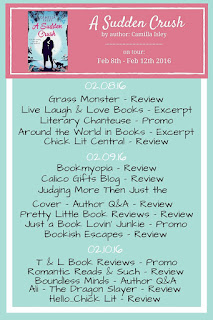 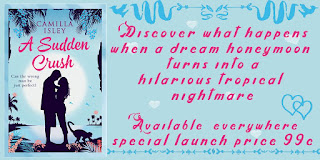