Blog Tour: Excerpt and Giveaway for Holding Out For A Hero by Victoria Van Tiem 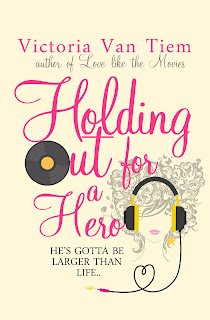 EXCERPT:
Prologue
My birthday hangs over my head like a noose.
I’d rather just skip it and take the day off. I’m like Cameron in Ferris Bueller: overwhelmed, wound up and seriously pessimistic about the whole idea. Ollie, my best friend's older brother and I used to debate this movie non-stop when we were teenagers. He swore the entire day was a delusion created by the very sick and depressed Cameron.
‘It’s a crazy theory that’s been floating around, but I stand behind it,’ he’d say with absolute certainty. Oliver liked nothing better than to argue.
I liked nothing better than to wind him up. ‘Sure, he was miserable and the timeline of events impossible, but it doesn’t prove Ferris was a figment of Cameron’s imagination. Was everyone fake? And why would he do that?’
I could hear him pacing, and imagined him at the other end of the line, wide-eyed and gesturing. I loved it when he got that way. I loved everything about him.
‘They’re real, Libby, just not in the context of Cameron’s fantasy. He created Ferris, or at least that version of him, because he had to. He needed a hero.’
Right now, I need a hero. Seriously: where’s my white knight upon a fiery steed? He doesn’t need to be strong, fast, or fresh from the fight, he just needs to be larger than life and capable of saving mine. It’s a mess. But there’s no way I could’ve predicted the position I find myself in right now.
No one could.

Happy Tour Week to Victoria Van Tiem, author of Holding Out for a Hero.


Buy the Book:
AmazonUS AmazonUK
--
Win the Book:
--
About the Author:

Victoria Van Tiem
Bio:
Victoria Van Tiem (pronounced ‘team’) is an international author of romantic comedy and dramedy novels, a former gallery owner and creative director with a background in brand development. She lives just outside of Indianapolis on a small hobby farm with her husband and two teenage boys.
Find her here:
http://www.victoriavantiem.com/ Twitter Facebook GoodReads Instagram
Check out all the stops in the Tour:

^click here to check it out^
Posted by Unknown at 4:00 AM