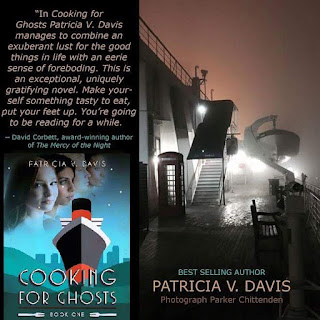 About Cooking for Ghosts by Patricia V. Davis
Do hearts broken long ago forever leave a tangible trace?

A Vegas cocktail waitress. An Indian herbalist. A British chemistry professor. An Italian-American widow. Four unique women with one thing in common: each is haunted by a tragedy from her past.

Cynthia, Rohini, Jane, and Angela meet on a food blogging site and bond over recipes. They decide on impulse to open The Secret Spice, an elegant café on the magnificent ocean liner, the RMS Queen Mary, currently a floating hotel in Long Beach, California. Rich in history and tales of supernatural occurrences, the ship hides her own dark secrets.

The women are surrounded by ghosts long before they step aboard, but once they do, nothing is quite what it seems. Not the people they meet, not their brooding chef's mystic recipes, and not the Queen Mary herself. Yet the spirits they encounter help them discover that there's always a chance to live, as long as one is alive. 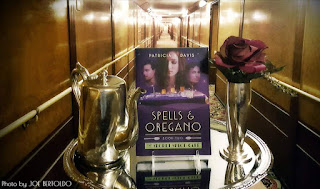 About Spells & Oregano by Patricia V. Davis
A mother desperate to save her twin sons, a war veteran in torment, a beautiful young psychic with a terrible secret, a powerful magician with a shattered soul, and a Queen steeped in history and glory. These extraordinary beings cross paths and set off a remarkable chain of events in Spells and Oregano: Book II in The Secret Spice Cafe Trilogy.

Overcome by despair after a trauma when she was sixteen, Sarita Taylor has spent the past ten years isolated and lonely aboard her beloved RMS Queen Mary. Fearful of outsiders, she dedicates her time to managing The Secret Spice Café, now an award-winning restaurant. Until Luca Miceli, a man with a dark past, steps on board.

Patricia V. Davis deftly spins past and present, mystery and magic, into a potent story of passionate longing and family tragedy all at once. Spells and Oregano is a compelling tale of atonement, devotion, and undying love, set aboard one of the world's most magnificent, haunted ships.

About Patricia
PATRICIA V. DAVIS's debut novel, COOKING FOR GHOSTS: Book I in The Secret Spice Cafe Trilogy was presented at the Queen Mary Salon Series. Book II, SPELLS AND OREGANO has just been released. Both novels are official selections of The Pulpwood Queens Book Club, the largest book club in the world, with over 700 branches. The Secret Spice Cafe Trilogy is also part of the Breathless Wines Bubbles and Books program. Book III in the trilogy will be released in 2019. Patricia lives with her poker player/rice farmer husband, and so divides her time between southern Nevada and northern California. Prior to starting a full time writing career, she taught English in Athens, Greece, and Queens, New York. Represented by Gordon Warnock at FUSE LITERARY.