Lady Be Good by Amber Brock 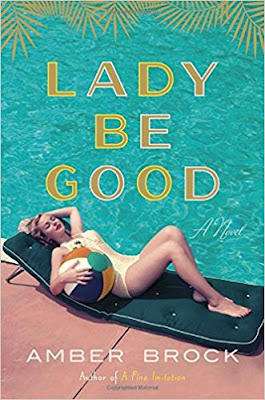 Kitty Tessler is the winsome and clever only child of self-made hotel and nightclub tycoon Nicolas Tessler. Kitty may not have the same pedigree as the tennis club set she admires, but she still sees herself as every inch the socialite--spending her days perfecting her "look" and her nights charming all the blue-blooded boys who frequent her father's clubs. It seems like the fun will never end until Kitty's father issues a terrible ultimatum: she may no longer date the idle rich. Instead, Kitty must marry Andre, her father's second-in-command, and take her place as the First Lady of his hotel empire. Kitty is forced to come up with a wily and elaborate plan to protect her own lofty ideas for the future, as well as to save her best friend, Henrietta Bancroft, from a doomed engagement: Kitty will steal Henrietta's fiance, a fabulously wealthy but terribly unkind man from a powerful family--thereby delivering the one-two punch of securing her now-fragile place on the social ladder and keeping her friend from a miserable marriage.

Then Kitty meets Max, a member of a band visiting New York from her father's Miami club, and her plans take a turn. Smitten, but still eager to convince her father of her commitment to Andre, Kitty and Hen follow Max, Andre, and the rest of the band back down to Miami--and later to Cuba. As Kitty spends more time with Max, she begins waking up to the beauty--and the injustice--of the world beyond her small, privileged corner of Manhattan. And when her well-intended yet manipulative efforts backfire, Kitty is forced to reconsider her choices and her future before she loses everyone she loves.

My Thoughts
What an AMAZING piece of historical fiction!  I loved every page! It also takes place in my favorite spots to visit - NYC, Miami and Cuba (I haven't been but I am dying to take a trip one day!)
Kitty Tessler is an only child growing up in NY high society (or trying to at least)in the 1950's.  Her father rose to the top from nothing but that doesn't mean much when you want to fit in with the old money types as Kitty does.  Recently, she has been trying to figure out how to marry the right man to get her to where she needs to be, who knew it could be so difficult?
Then the ultimatum comes from her father - start to settle down or you will be getting a job starting as a maid in the hotel.  Someone must be getting sick of her over the top constant spending.
Kitty has two goals she must meet trying to keep herself from mopping the bathrooms - she needs to find a man to marry in the right social class and she needs to get her best friend away from the man that is ruining her life.
Then one night at the club, Kitty meets Max, a trumpet player in a band visiting from her father's Miami hotel.  Well, he's not exactly high society, at all.  What is she going to do?
Of course a trip to Miami is order (and a Cuba detour) and that may be a recipe for trouble.  Will she marry Andre?  Will she kindle a relationship with Max?  Will Hen find out her plans to sabotage her engagement to a man she hates? What could possibly go wrong?  Or maybe things will turn out perfectly right?  Grab this amazing 2018 beach read today!  You will LOVE it!

Drink Selection
What better drink to pick for this tale then the Miami Beach Cocktail, doesn't that look fabulous?
"This Prohibition-era classic combines grapefruit juice with smoky scotch and dry vermouth."

Combine vermouth, grapefruit juice, and scotch in a cocktail shaker filled with ice; shake vigorously and strain into a chilled coupe glass.

This delicious recipe is from:
Saveur

AMBER BROCK teaches British literature and creative writing at an all girls' school in Atlanta. She holds an MA from the University of Georgia and lives in Smyrna with her husband, also an English teacher, and their three rescue dogs.