The Last Time I Lied by Riley Sager 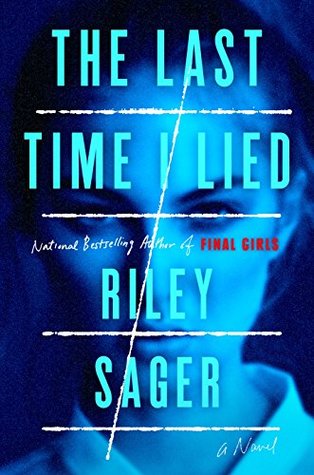 Two Truths and a Lie. The girls played it all the time in their tiny cabin at Camp Nightingale. Vivian, Natalie, Allison, and first-time camper Emma Davis, the youngest of the group. The games ended when Emma sleepily watched the others sneak out of the cabin in the dead of night. The last she--or anyone--saw of them was Vivian closing the cabin door behind her, hushing Emma with a finger pressed to her lips.

Now a rising star in the New York art scene, Emma turns her past into paintings--massive canvases filled with dark leaves and gnarled branches that cover ghostly shapes in white dresses. The paintings catch the attention of Francesca Harris-White, the socialite and wealthy owner of Camp Nightingale. When Francesca implores her to return to the newly reopened camp as a painting instructor, Emma sees an opportunity to try to find out what really happened to her friends.

Yet it's immediately clear that all is not right at Camp Nightingale. Already haunted by memories from fifteen years ago, Emma discovers a security camera pointed directly at her cabin, mounting mistrust from Francesca and, most disturbing of all, cryptic clues Vivian left behind about the camp's twisted origins. As she digs deeper, Emma finds herself sorting through lies from the past while facing threats from both man and nature in the present.

And the closer she gets to the truth about Camp Nightingale, the more she realizes it may come at a deadly price.

My Thoughts
Can I just say how much I LOVE Riley Sager's books?  LOVE!  I was so excited when I heard that this was being released, and it lived up to all of my expectations!
The setting was super scary (I can't believe I ever went to summer camp, thank god I didn't read this first HAHA), the characters were written perfectly, I could really see this as a movie, for sure.
Hmmm the main characters in my mind would be:
Vivian - Chloe Moretz
Emma - Elle Fanning
Theo - Chris Helmsworth
Chet - Liam Helmsworth
Sorry to digress for a moment there. HA!
Sager has the perfect amount of suspense, intrigue and deceit all in one amazing summer read.
Who knew two truths and a lie could be so sinister?
The story begins when Emma was a first time attendee at Camp Nightingale.  She was placed in a cabin with older girls, being that she was the last to show up that day (fashionably late, right?).
She begins to idolize Vivian and then it turns into envy and eventually she begins to see her true colors and wants nothing to do with her.
And then her first camp experience turns into a nightmare when Vivian, Natalie and Allison leave in the middle of the night and never return.
15 years later, Franny the camp director approaches Emma and asks her to return for a final summer.  To get some sort of piece after what had happened all that time ago.
Then creepy things begin to happen to Emma - is she seeing things, did that really happen?  Will she survive this summer at Camp Nightingale or will the horror of what happened all those years ago swallow her whole?

Drink Selection
The perfect drink for this selection - Chasing Summer!

Note: Place 1 chai tea bag and 12 ounces cold water in a glass jar. Cover and leave in a sunny, warm place for 1 hour. Discard the tea bag and refrigerate the tea for up to 2 weeks. Makes 12 ounces.

Rating
Could there possibly be any rating other than 5?  No!

About Riley
Riley Sager is the pseudonym of a former journalist, editor and graphic designer who previously published mysteries under his real name.

Now a full-time author, Riley's first thriller, FINAL GIRLS, became a national and international bestseller and was called "the first great thriller of 2017" by Stephen King. Translation rights have been sold in more than two dozen countries and a film version is being developed by Universal Pictures.

Riley's next book, THE LAST TIME I LIED, will be published in July. It was inspired by the classic novel and film "Picnic at Hanging Rock" and one horrible week Riley spent at summer camp when he was ten.

A native of Pennsylvania, Riley now lives in Princeton, New Jersey. When he's not working on his next novel, he enjoys reading, cooking and going to the movies as much as possible. His favorite film is "Rear Window." Or maybe "Jaws." But probably, if he's being honest, "Mary Poppins."