Leave No Trace by Mindy Mejia 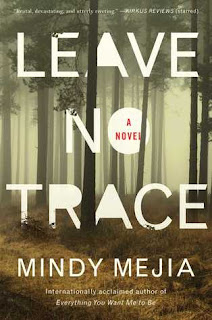 ﻿
There is a place in Minnesota with hundreds of miles of glacial lakes and untouched forests called the Boundary Waters. Ten years ago a man and his son trekked into this wilderness and never returned.

Search teams found their campsite ravaged by what looked like a bear. They were presumed dead until a decade later...the son appeared. Discovered while ransacking an outfitter store, he was violent and uncommunicative and sent to a psychiatric facility. Maya Stark, the assistant language therapist, is charged with making a connection with their high-profile patient. No matter how she tries, however, he refuses to answer questions about his father or the last ten years of his life

But Maya, who was abandoned by her own mother, has secrets, too. And as she’s drawn closer to this enigmatic boy who is no longer a boy, she’ll risk everything to reunite him with his father who has disappeared from the known world.

My Thoughts
This is my first read of Mindy's and it will not be my last.  Such an amazing read.
I was very intrigued about the way in which Mindy blended two stories effortlessly, seemlessly together.  Just when I thought I was figuring out this tale she sent me in a whole other direction.
Part of me would love to visit the Boundary Waters myself, they seem like a great way to escape from reality, although for me maybe a day, not 10 years like Lucas and his father.
Maya had not had the easiest upbringing and was in a psychiatric facility herself yet she was picked to take the lead on Lucas's case.  He was a missing child, from 10 years prior and he commited a handful of crimes that in turn led to murder.
Maya is suppose to try and get Lucas to talk and shed some light on where he has been and where his father may be.
But then Maya and Lucas's secrets start to blend together, is there a connection there?  (I can't ruin the plot twists but I can honestly say that they are intense)


Drink Selection
I will pair with this turbulent read with a Bloody Mary, it just seems fitting. (It is also a top drink in Minnesota)

About Mindy
My name is Mindy Mejia and I’m a writer. I write because, ever since I was six years old, my favorite game has been pretend. My life doesn't have symmetry, theme, symbolism, or meditated beauty and I gravitate toward these things like a houseplant to the sun. I love the perfect words; I love how “fierce” and “confounded” and “swagger” look on the page and how my chest expands when I read them. I write because I believe in the reality of my fantasies, the truth in my fabrications. I’ve always had stories sneaking around my head, thrillers like THE DRAGON KEEPER and EVERYTHING YOU WANT ME TO BE, and sometimes I inhabit those stories more than my own life. (Best not to mention that last part to my husband, kids, or boss.)