Blogiversary Excerpt and Giveaway: All The Good Parts by Loretta Nyhan 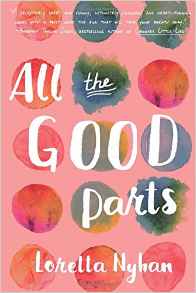 Excerpt
“Yesterday you were trying to figure out how to get the money to buy a pair of leather boots and complaining about how difficult it’s going to be to juggle your job with this new class,” she said. “Today you’re talking about having a baby. It seems impulsive, doesn’t it?” She kicked the kids’ discarded backpacks into the mudroom and handed a broom to Donal, who’d just gotten home from work. “The idea of a baby didn’t even enter your mind until Dr. Bridget mentioned it. How could you not want a baby this morning and want one now?”
Donal raised an eyebrow at the topic but kept his mouth shut.
“It’s always been on my mind,” I said, matching her snippy tone.
“Has it?”
“It’s always been in my mind. Sitting quietly. Patiently waiting for me to notice.”
“Having a baby is not something done on a whim,” Carly said, nose in the air.
At this, Donal laughed. Carly had met her future husband, a not exactly legal Irish immigrant, in a downtown bar one sultry summer night, and Maura was conceived a week later. Donal, a walking cinnamon stick of a man—tall, lean, and gingery—turned out to be great, the kind of solid, caring person I always hoped both my sister and I would marry. He had only one fault as far as I could tell—the inability to maintain any kind of financial security. But that was okay. We did the best we could to work around it.
I bit my tongue and didn’t bring up Maura’s inauspicious start. When our father passed three years ago, Carly and I decided to be nice to each other whenever we were tempted to be mean, as we no longer had anyone to referee our disagreements. Donal lobbied for the job, but we agreed he’d be unconsciously biased. We made a pact to at least try to behave ourselves, but our history was long and our tempers short.
Josie helped me resist the snarky comment at the edge of my tongue. She was gently tapping my forehead with the spoon and giggling, her blue, long-lashed eyes twinkling with delight.
“It’s not always like that and you know it,” Carly said, watching us.
“Sometimes it is like this,” I said, and kissed Josie’s smooth forehead to punctuate my statement, fully aware I was overdoing it a little. Truth be told, my nieces and nephews regularly shred my nerves like confetti. But they could also send my body into hypoglycemic shock with their surprising sweetness, and my love for them felt more than unconditional; it felt unquestionable.
“I’ve held all four of your kids like this,” I told Carly, wrapping my arms tighter around Josie’s belly, “my heart bursting as I did. I used to wonder what it would be like to hold my own, if it’d be possible to love someone more. Are you saying I should live the rest of my life without knowing?” 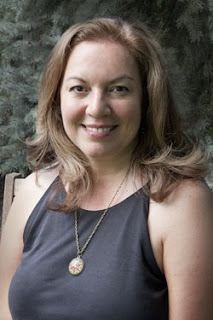 About Loretta
Loretta Nyhan lives in the Chicago area with her sons. She had two books releasing in 2013--THE WITCH COLLECTOR, a mysterious paranormal thriller from HarperTeen, and an epistolary novel co-written with Suzanne Hayes, I'LL BE SEEING YOU, about two women connecting with each other on the homefront during WWII (Harlequin-MIRA).


a Rafflecopter giveaway
Posted by Unknown at 4:00 AM