EXCERPT
It took three hours to clear the kitchen of its clutter, and a further two just to clean it. By the time she had finished Edie had two black sacks full of out of date food, including tins of things that might be museum pieces if they hadn’t been so rusty and rimed with age. Some of the items she had consigned to the rubbish were artefacts of social history, but too far gone to be of any value or interest. A silver tea service, black with tarnish but complete with the original tray might be worth something and had been consigned to a box for further consideration and cleaning. Alongside it lay a variety of storage tins, possibly of interest to collectors of vintage kitsch and tawdry paraphernalia. There had been a ton of them, but some still contained detritus of dubious origin, which had turned Edie’s stomach and it had been too much trouble to attempt to salvage the tins.

The huge metal teapot – beloved of Dolly, and her mother before her – had been consigned to the bin. Edie couldn’t face a cup of anything brewed inside its tannin lacquered innards and settled instead for a tea bag in a chipped coronation mug, filled with water from the ancient enamel kettle which still functioned, though it had lost its whistle long ago. Edie was weary from her labours, but satisfied that she had made a dent and brought a measure of civilisation back to the proceedings. At least she knew she was less likely to contract something systemically untenable from the kitchen. The toilet had to be her next port of call and by the look of it anything might be mutating in there. It had received a whole bottle of bleach a few hours before and she hoped the substance would live up to its claims and kill ninety-nine percent of all known germs, though she could hazard a guess that Dolly had nurtured a few million as yet uncharted by biology. At this stage it was tempting to just cordon everything off with biohazard tape and throw petrol on it. Unfortunately it wasn’t an option; arson wouldn’t pay the debts. The debts were a puzzle, there had been no evidence that Dolly had been short of money, yet she had released equity from the house and left it mortgaged to the hilt. There was even less evidence of where the money had gone. It certainly hadn’t been spent on the high life or home improvements.

At five o clock Edie started to feel hungry and contemplated revisiting the shop in search of food. A quick glance in Dolly’s dusty hall mirror told her that she would probably need a bath and a change before venturing out. The grime of the kitchen had transferred itself to her and she ran the risk of being picked up for vagrancy if seen in public in that state. She had yet to assess the condition of the upstairs bathroom and dreaded what she might find. Halfway up the stairs her progress was interrupted by a sharp knock at the door.

A young girl, maybe fourteen or fifteen, stood on the doorstep. She surveyed Edie’s dishevelled state with utter disdain but delivered her message anyway. ‘Nan says to ask if you are Rose or Edie.’
‘I’m Edie, why?’

‘Nan says if you’re one of them you’re to come round for a cup of tea.’
Edie was taken aback, ‘That’s very kind of your nan, but it’s really not necessary.’

‘Nan said you would say that, and told me to tell you to wind your neck in and do as you were told and that Beattie would have tanned your hide for being so rude.’ The girl said it as if she had rehearsed her speech thoroughly. ‘Who’s Beattie?’ she added as an afterthought.

Edie smiled, ‘Beattie was my nan, and she was twice as terrifying as yours. Tell Lena I’ll be round in twenty minutes. And tell her I said thank you.’

The girl nodded and made to turn away, ‘So, what’s your name?’ Edie asked.
‘Georgia.’ the girl said as she flitted back down the front steps.

So, Lena Campion was still alive and more than likely the quiet observer behind the lace. Edie remembered her well, but had forgotten the neighbourliness that would make a person invite a virtual stranger to tea. Perhaps it was an artefact of the days when Coronation Square had been the kind of place where no one locked their door and there had been a lively trade in bartered cups of sugar and shillings for the meter. Edie shrugged off the reverie and returned to the task of cleaning herself up, dwelling on the past could serve no useful purpose.

The bathroom was just as bad as everywhere else and even ten minutes of scouring couldn’t bring the bath up to any acceptable shade of white, but Edie figured it was clean, if not attractive. A tepid, shallow bath was run from the worryingly ancient hot water heater that needed a match to light it and a prayer to stop it from exploding. Edie wondered that Dolly had survived at all, alone in such a house; it seemed booby trapped by antiquity and liable to be the death of someone sooner or later.
At six twenty-five she had managed some semblance of humanity again and set off to Lena’s for the promised tea. 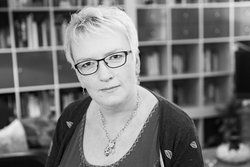 ABOUT THE AUTHOR
Ann lives in Devon in a little house by the sea which she shares with her husband and a small white dog who believes himself to be in charge. With his reluctant permission she is sometimes allowed to be inattentive to him and write books. She drinks too much coffee, follows the Miss Havisham guide to housekeeping and can kill a houseplant at twenty paces just with the power of her thoughts.