Blogiversary Excerpt and Giveaway: Game of Scones by Samantha Tonge 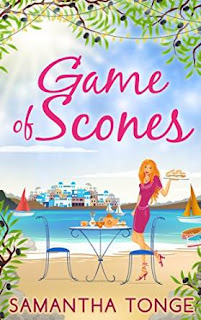 SUMMARY
Growing up, Pippa Pattinson’s summers were spent in the idyllic Greek island fishing village of Taxos. There she spent many long hazy days determinedly ignoring thoughts of the life her parents had mapped out for her (a dreary-but-secure accounting job and obligatory sensible husband!) Instead she daydreamed of running her own tea shop – serving the perfect scones – with mocha-eyed childhood friend Niklaus by her side…
Arriving back in Taxos for the first time in years, with suave boyfriend Henrik, Pippa barely recognises the tired little town – but is relieved to catch glimpses of the quaint, charming village she’s always loved. Together Niklaus and Pippa put together a proposal to save Taxos from tourist-tastic ruin, and at the heart of their plan is Pippa’s dream project: The Tastiest Little Tea Shop in Taxos. It’s time for Pippa to leave her London life behind and dust off her scone recipe that’s guaranteed to win over both locals and visitors. And amidst the rolling pins and raisins, it seems romance is blossoming where she’s least expecting it…


Word to the wise: never Google “Dutch” and “Sex” in the same sentence. Mmm, tempted you, haven’t I? A graphic image hovered in my mind, after I closed the page on my browser. Really? How was that even possible? With a brief smile, I put my phone on the coffee table and snuggled back into the black leather sofa. On my lap lay a pen and sheet of paper. For important decisions, I had to map out my thoughts the old-fashioned way. On one side I’d scrawled a list titled HEAD: reasons for staying together. On the other, HEART: reasons for breaking up.
Breaking up, that was, from my six foot four boyfriend, Henrik from Holland. Okay, so he was only half-Dutch, thanks to his mum Greta, a divorced liberalist, who strutted around her house half- naked. However, he showed several of the stereotypical characteristics of a Dutchman that I’d just discovered on the internet, in a bid to come to a decision about our future. Despite Henrik’s ever-increasing earnings as a real estate developer, he counted every single penny. Plus he could be direct to the point of sounding rude – although I just called that honesty.
On the plus side… what can I say, his lack of inhibition in the bedroom had rubbed off onto missionary-position me. Talk about fifty shades of yay! In fact, on hearing that Christian Grey’s safe word was “red”, for a joke we’d set ours as “pneumonoultramicroscopicsilicovolcanoconiosis”, the longest word in the English language. Just as well our love life, whilst adventurous, didn’t really include risky whips, clamps or cable ties.
A picture of Henrik came into my mind, with his slicked-back oat-coloured hair, Atlas shoulders and Titan height. This guy had the swoon-factor in excess – or at least that’s how I used to feel, until recent months. The first time our eyes had locked, his crinkled in a way that made me feel like a teenager crushing on a boyband. What’s more he was ambitious – for both of us – could wire a plug, kept fit and cooked a mean bowl of pasta…
Gushing now, wasn’t I, as the list under HEAD (to stay with him) grew longer? It sounds shallow, but hands up, I’ve been constantly bowled over by his Hollywood looks – until lately when, for some reason, his super suave appearance has grated. I know. Ridiculous. Talk about picky. Yet, thanks to my maths degree, I am analytical to the extreme, which means weighing up all the evidence – including my gut feelings. So I’d almost come to a decision – that just this once, I should listen to my heart and tell myself I’m actually not being silly. Despite Henrik’s considerable physical assets and appealing personality traits, my head needed to listen to my heart shouting that our relationship no longer felt right.