Blogiversary Excerpt: It's Getting Hot In Heir by Jenny Gardiner 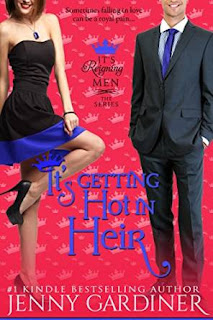 IT’S GETTING HOT IN HEIR 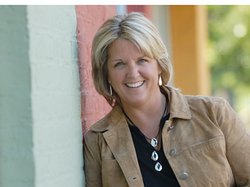 ABOUT  JENNY
Thank you so much for checking out my books! I hope you will find some that keep you from doing the dishes, or vacuuming, or maybe even cause you to stay up later than you'd planned to (although I covet my sleep, so I'd feel guilty if I was to blame for that too often!).

My novel SLEEPING WITH WARD CLEAVER won the Romantic Times/Dorchester Publishing's American Title III contest. And my novel SLIM TO NONE was a #1 Kindle bestseller (it even surpassed a John Grisham novel for a day!).

I've also written these books: the IT'S REIGNING MEN contemporary romance series, including SOMETHING IN THE HEIR, HEIR TODAY GONE TOMORROW, BAD TO THE THRONE, LOVE IS IN THE HEIR and SHAME OF THRONES (book 6, THRONE FOR A LOOP, comes out in March); ANYWHERE BUT HERE; WHERE THE HEART IS; the memoir WINGING IT: A MEMOIR OF CARING FOR A VENGEFUL PARROT WHO'S DETERMINED TO KILL ME (Simon Spotlight/March 2010), which is now renamed BITE ME: A PARROT, A FAMILY AND A WHOLE LOT OF FLESH WOUNDS; as well as the essay collection NAKED MAN ON MAIN STREET. I have two contemporary romance novels I wrote under the pen name Erin Delany: ACCIDENTALLY ON PURPOSE, and COMPROMISING POSITIONS.

Lastly, I have a short story in Wade Rouse's fabulous anthology of humorous dog stories, I'M NOT THE BIGGEST BITCH IN THIS RELATIONSHIP featuring authors Jen Lancaster, Rita Mae Brown, Sarah Pekkanen, Wade Rouse and more. And I've got many more novels in the works!

I've had pieces appear in Ladies Home Journal, the Washington Post, Marie-Claire.com, and on NPR's Day to Day. I honed my fiction writing skills while working as a publicist for a US Senator. Other jobs I've held have included: an orthodontic assistant (learning quite readily that I wasn't cut out for a career in polyester), a waitress (probably my highest-paying job), a TV reporter, a pre-obituary writer, and a photographer (once being Prince Charles' photographer in Washington!). Oh I'm also the volunteer coordinator for the Virginia Film Festival, which is a great one!

I live in Virginia with my husband and a small menagerie; we have three grown children, one of whom lives in Australia and I dream of visiting her there. I love all things Italian, regularly fantasize about traveling to exotic locales, and feel a little bit guilty for rarely attempting to clean the house.

I hope you'll sign up for my newsletter so you can hear about upcoming releases and get special offers here: http://eepurl.com/baaewn . And I love to hear from readers! Please let me know what you think of what you read at jenny@jennygardiner.net.