Blogiversary Excerpt and Giveaway: A Sudden Crush by Camilla Isley 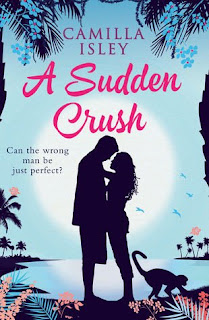 Joanna Price is a city girl with the perfect life. She loves her job as a book editor, she just married Liam, high profile bestselling author and the man of her dreams, and she’s headed to the Caribbean to enjoy two weeks of paradise for her luxurious honeymoon.
Connor Duffield is a gruff, grumpy rancher from the Midwest. He is a country boy who has a no-nonsense approach to life, more scars than he’d like to admit, and he hates city girls.

So it’s just a misfortune they have to sit next to each other for a six hour plane ride. Even more so when their flight is caught in the perfect storm and Joanna wakes up stranded on a desert island with Connor, the very man she hoped she would never have to see again.

Why are they alone on this forsaken island? What happened to Joanna’s husband?

When her dream honeymoon turns into a hilarious tropical nightmare, Joanna’s first thought is survival. However, she and Connor will quickly discover just how boring paradise can be. As the days turn to weeks, and then months, this mismatched pair will have to learn how to coexist and how to resist the sparkles of an attraction they weren’t prepared to feel.

When they are finally rescued will Joanna’s marriage be saved as well, or will the life she knew and loved be in ruins?