Blogiversary Excerpt and Giveaway : Down on Love by Jayne Denker 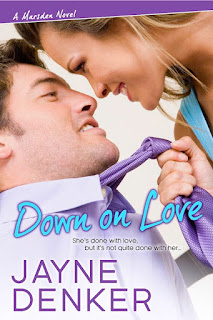 When it comes to love, she's a professional skeptic. Is it too late for a career change?

If there's one thing Georgiana Down is an expert in, it's bad relationships. That's what inspired her blog, Down on Love, where she gives snarky advice--usually along the lines of "dump him." In fact, George is abstaining from men all together. At least that's the plan--until she makes a trip back to her tiny hometown in the Catskills, where meddling is an art form...

George loves helping out with her new baby niece, but she's counting the days until she returns to Boston. Then she runs into Casey Bowen, her high school crush. The boy she once loved is now a handsome grown man--and suddenly George needs a little advice of her own. She's in the right place, because when she drunk posts on her blog, everyone in Marsden has something to say about George and Casey. It's like high school all over again--but maybe this time she'll get things right...

Billy—Will, whatever—watched her carefully as she tussled with the misbehaving straps. “George, you weren’t thinking of driving home, were you?”

“I’m driving her home, Will,” Casey spoke up. “I’ll make sure she gets in all right. You have a good night, okay?”

Casey grabbed her arm and steered her up the block toward Main Street.

George dragged her heels and started to protest. “I don’t need—”

“Now, now, none of that. Let’s get you home, Drunky McTesty. Before you get yourself in trouble.”

They stopped by Casey’s F-250 and he reached for the door handle, but George dodged around him and stumbled into the street, which fortunately was empty. He corralled her easily, since he was sober and she was wobbly, and he gently grasped her arm.

“Come on, let go! I want to see that.” She pointed with her free hand back toward the buildings nearby.

Casey tightened his grip, probably thinking she might be trying to distract him so she could dart away again, then looked over his shoulder at where she was pointing. “What?”

Instead, he took her hand and let her lead him up onto the sidewalk outside the post office. Sure enough, right at the corner, in the pedestrian walkway leading to a parking area behind the building, there was another spray-painted picture on the sandstone, this time one of a stick figure “climbing” out of a crack in the building, holding a bunch of flowers.

“Oh, how cute,” George cooed. From somewhere in the back of her fuzzy brain she realized she might be sounding like an idiot. But it seemed perfectly suitable at the moment. She moved forward, but Casey stayed where he was. Their hands separated. She stared intently at the graffiti, then she reached out and touched it with a fingertip. She spun around. “It’s still wet! Hey, I’ll bet Marsdy is still around somewhere! Let’s go hunt ’im down!”

She ran back to him, tripped a little, and lurched into him. He caught her and held on.

Casey herded her toward the truck. “Are you always like this when you drink?”

“You don’t say.” He propped her against the truck and reached around her to open the passenger door.

“How come Officer Billy didn’t give you a hard time? You could be drunk too.”

“But I’m not. And he knows I’m not stupid enough to drink and drive.”

“Are you kidding? I’ve seen him in his footie pajamas.” George muttered, “I don’t need your help, you know.”

“Of course not. But I promised Officer Billy I’d get you home, so that’s what I’m going to do. And don’t worry about your car. Give me your keys and I’ll drive it to the house later.”

She moved sideways and blocked him. “You...you...” She wasn’t sure what she wanted to say. Then she blurted out, “Stop being so nice.”

Neither of them moved, even though they were only inches apart. George felt the heat from his arm near her waist, as he grasped the door handle. Her heart rate picked up. She cursed her traitorous body and took a steadying breath.

Casey studied her closely. “Is that what you like? Guys who aren’t nice?”

“No,” she said in what she hoped was a scoffing tone.

“Because that’s not me.”

“There’s such a thing as too nice, you know.”

“Get in the truck, George.” He finally moved her aside, a little roughly, and yanked open the door.

“You bug me,” she grumbled, but she let herself be tucked into the passenger seat.

He tossed her a brilliant, genuine smile as he clicked her seat belt into place. “No, I don’t.”

“Stop telling me what I think, mister. You don’t know me.”

Then his hand wasn’t on the latch of the seat belt, but on her waist instead, his fingers and palm pressing into her. He pinned her with his gaze, a bar of shadow in the darkness. “Oh, I know you, Goose. I know you better than you’d ever admit.”

The heat of his hand through her blouse was like a brand. She fought through the fog that swept over her brain, eventually managing to stammer, “You haven’t seen me in my footie pajamas.”

“Is that an invitation?” 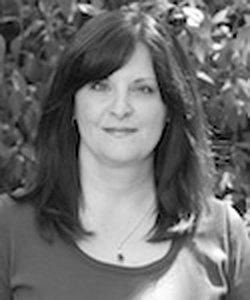 Jayne Denker divides her time between working hard to bring the funny in her romantic comedies and raising a young son who's way too clever for his own good. She lives in a small village in western New York that is in no way, shape, or form related to the small village in her Marsden novels Down on Love, Picture This, and Lucky for You. When she's not hard at work on another novel, the social media addict can usually be found frittering away startling amounts of time on Facebook.